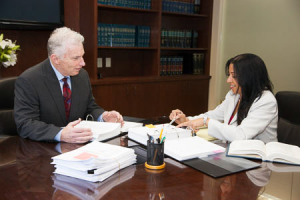 When it comes to handling high stakes litigation, whether it’s a multi-million dollar Ponzi scheme involving claims of professional liability or bad faith actions with punitive damages exposure, it’s good to know that your attorneys have competence in the area – and know just what to do.

Garrett & Tully has exposure to every phase of business and real estate law with a track record for winning at trial. Our capabilities are delivered through a client-centered, results-oriented approach that focuses on what matters most. Title Insurance, Accounting Malpractice or EEO Litigation, no matter the topic, we speak the language.

The buyers’ suit alleged the insured lender misrepresented that its deed of trust was in first position. The DOT had been insured in first position, but the buyers learned after they bought PIQ that there was a senior lien. The claim of misrepresentation was based on the fact the recorded DOT stated it was a first-position lien.

The court of appeal held there was no duty to defend the lender against the buyers’ suit and no coverage. The lender’s coverage had terminated. The lender did not carry back a note, and had sold PIQ at foreclosure without warranty.

Note another wrinkle. The buyers dismissed their suit against the lender in exchange for an assignment of the lender’s rights under the title policy. It was the buyers that then sued our client, the title insurer. Among other things, the court explained that the buyers were improperly trying to circumvent the fact they were not insureds, and they should have purchased their own title policy and/or done their own due diligence before buying PIQ at foreclosure. Nevertheless, the buyers had no greater rights than did the insured lender, and for the reasons discussed above, the insured lender was not entitled to defense or indemnity.  Read the Court Opinion Here

Mac Donald v. Unanian (December 2013) – Plaintiff claimed his tax preparer negligently prepared his tax returns by over-reporting income of over $990,000. The tax preparer denied any duty to verify or audit the figures provided by plaintiff for purposes of preparing plaintiff’s tax returns. Following a court trial, the Court entered judgment in favor of the tax preparer and against plaintiff and awarded the tax preparer his expert fees and costs. Natalia M. Greene and Stephen J. Tully; LASC.

Iskowitz v. Marciano— Obtained dismissal of claims seeking over $100 million in damages against former accountant brought by well-known clothing designer and real estate investor.  Judgment of $36.25 million in favor of clients obtained on counter-suit for defamation. Steve Tully and Efren Compeán; LASC Case No. BC384493 (June 2013).

Czajkowski v. Haskell & White—Published opinion affirming defense judgment in favor of firm’s client based on statute of limitations and holding it is plaintiff’s burden to prove “inability” to discover the facts underlying a cause of action in order to avoid statute of limitations bar; Steve Tully, Ryan Squire and John Greene; 208 Cal.App.4th 166 (2012).

Conquest v. Hinton, Kreditor, Gronroos LLP—Plaintiffs claimed over $25 million in damages due to accountant’s alleged negligent preparation of a business appraisal.  After a 9 day trial, the Court entered judgment in favor of accountant and against Plaintiffs and awarded accountant $450,000 in costs of suit and disbursements.  Stephen Tully and Trang Tran. LASC.  View/Download Case Summary

We represented a large franchise restaurant in a wage and hour class action with hundreds of potential class members and multiple millions of dollars in exposure. After aggressively attacking the claims early on, we were able to resolve it for less than 10% exposure and a fraction of the anticipated costs of defense.

Defense of an employer and its officers in an action for sexual harassment and retaliatory termination brought by an office worker who claimed that she had been promoted to office manager and promised an ownership interest in the business. After several intense days of deposition, the plaintiff agreed to settle her claims at a mediation for less than 10% of her original demand. Efren Compean; LASC.

Defense of a professional partnership in wrongful termination claim by a former member.  A preemptive lawsuit was filed on behalf of the partnership based on the former member’s contractual breaches, misappropriation of confidential information and tortious interference.  The matter was quickly resolved through a substantial net payment to our client. Efren Compean; LASC.

Successful resolution of a wage and hour class action against a restaurant chain with several million dollars in exposure for a net settlement of less than $80,000. Efren Compean and Trang Tran; LASC.

Demurrer sustained without leave to amend in action by minority shareholder against corporation and majority shareholders for alleged breaches of fiduciary duties and  mismanagement. Steve Tully and Efren Compean; LASC.

Iskowitz v. Marciano– Judgment of $36.25 million in favor of clients for defamation resulting in injuries to personal and professional reputations.  Steve Tully and Efren Compean; LASC.

Fey v. Galletly—Judgment of $3.9 million in favor of firm’s client after obtaining order striking cross-defendant’s answer and cross  complaint; Robert Garrett and Ed Racek and LASC Case No. BC411601 (2013).

Schwarcz v. Rashididoust— A title defense case in which we successfully moved to expunge a lis pendens and obtained an alternative writ in the District Court of Appeal.  Robert Garrett and Zi Lin.

Mitteldorf v. Shevin, et al.— Defense of Appraisers claim that the value of a Hidden Hills home purchased from former teen idol writer/producer had been overstated. After a two week jury trial claiming losses of $1.8 million, the court granted a directed verdict in favor of the appraisers.  Scott Mahler and Brian Ludeke represented the appraisers at trial.  LASC Case No. BC499364.

Willemsen v. Mitrosilis, et al.—  -Published opinion affirming summary judgment in favor of the firm’s appraiser clients.  Plaintiff claimed appraisers made misrepresentations regarding a multi-acre commercial parcel and sought over one million dollars in damages.  Appellate court held that a borrower may not reasonably rely on an appraisal obtained by a lender for loan underwriting purposes; Scott Mahler; (2014) 230 Cal. App. 4th 622.

In re Kenny G. Enterprises, LLC— The insured property owners who purchased a multi-million dollar residential property in Northern CA from a debtor, after confirmation of the debtor’s Chapter 11 bankruptcy plan, found that the Chapter 11 trustee had filed an adversary proceeding alleging the sale to be a fraudulent transfer.  On appeal, the appellate court reversed the trial court’s denial of our motion to dismiss holding that that U.S. Bankruptcy Code § 544(b) only applies to pre-bankruptcy petition transfers. The appellate court remanded the case to the trial court instructing the clerk to enter judgment in our clients’ favor consistent with the appellate opinion; resulting in dismissal of the case, and entry of judgment in our client’s favor; Tomas Ortiz, Jennifer Slater, and Zi Lin; USDC, C.D. Cal (June 2014).

Name Withheld— In an action by the borrowers against a lender for violation of the California False Claims Act, fraud, violation of the Fair Debt Collection Practices Act, breach of contract, wrongful foreclosure, violation of Business and Professions Code section 17200 et seq., and violation of Consumer Legal Remedies Act, the court sustained the lender’s demurrer on plaintiffs’ third amended complaint without leave to amend, and entered judgment in favor of the lender. Candie Y. Chang.

Liberty National Enterprises, L.P. v. Chicago Title Insurance Company—Engaged as amicus curiae by the California Land Title Association on appeal to challenge a jury verdict awarding compensatory damages of $1 million. In a published opinion, the appellate court reversed the damage award and held that a title insurer is not obligated to defend a lawsuit where intentional misconduct is alleged, irrespective of whether the insured is actually innocent of the alleged misconduct; Ryan Squire, Robert Garrett and Zi C. Lin; 217 Cal.App.4th 62 (2013).

Dollinger Deanza Assoc. v. Chicago Title Ins. Co.—Engaged by the California Land Title Association to appear as amicus curiae. In a published opinion, the court of appeal held that a “notice of merger” recorded under the Subdivision Map Act did not render title unmarketable; Ryan Squire, Mike Dewberry and Zi C. Lin; 199 Cal.App.4th 1132 (2011).

Kwok v. Transnation Title Ins. Co.—Published opinion affirming summary judgment in favor of title insurer where title was transferred by the insureds for tax planning to LLC as trustees of revocable family trust prior to discovery of easement allegedly interfering with development of property; Robert Garrett, Ryan Squire and Zi C. Lin; 170 Cal.App.4th 1562 (2009).